» What is Homeopathy » Homeopathic Description

Homeopathic medicines are micro-dosed natural substances derived from botanical, animal or mineral sources. A specific homeopathic medicine dilution is obtained by a precise and controlled process of successive “homeopathic dilution”. The medicine is diluted or de-concentrated and then vigorously shaken, traditionally referred to as succussion. This process transforms the original substance into a therapeutically active medicine.

Homeopathy is a safe and natural method to balance the body and allow the body to heal. Homeopathy stimulates the body’s ability to heal with very small amounts of natural substances.

The wonder of homeopathic medicine is in its safety, the incredibly small amount of medicine needed, and the rapidity of healing. Homeopathy is from 2 Greek words, homoios: meaning similar and pathos: meaning suffering. Homeopathy therefore means similar cures similar or like cures like. The word Homeopathy was first coined by Samuel Hahnemann, the founder of modern homeopathy.

ALLOPATHY -another term for conventional medicine that uses opposing substances to suppress symptoms in the body.

CELL SALTS -homeopathic potenized minerals used by cells. Can be used regularly for general maintenance, or for specific health problems. Often used in conjunction with a single remedy or combination product to provide basic support to the cells. Cell Salts are used in my NuFem Skyn Homeopathic Serum and we have had great success with this product especially if used in conjunction with the entire skin care kit.

CLASSICAL HOMEOPATHY -the practice of finding the Simillimum for a person and giving one remedy at a time.

SUCCUSSION -forceful shaking, was originally done by hand. Nowadays much of it is carried out by machine, but even with mechanical aids it may take up to 10 or 12 weeks to prepare tinctures of the highest potencies. In the nineteenth century this time element led to the work of preparing some of these potencies being entrusted to people like lighthouse keepers, who had long, lonely hours on duty with only their light to tend. The rhythmic, carefully repeated motions required in trituration and succussion helped to keep them awake, while at the same time benefiting homeopathy.

Each succussion should be equivalent to the force exerted by an average healthy man when striking a hand-held phial (a firmly-stoppered test-tube or other laboratory container) forcefully against a firm surface. Hahnemann used a large leather-bound book. At each succussion the phial came to a brief stop, inertia making the liquid jump in the phial. Today machines imitate this action, but they need careful regulating and frequent maintenance to ensure that the succussion is standardized.

COMBINATION HOMEOPATHIC PRODUCT -a homeopathic product containing more than 1 homeopathic remedy. Combination products are commonly used in our increasingly polluted world for our complex health problems whether seasonal or chronic. No side effects with homeopathy, so remedies can be safely combined. Remedies may work together to strengthen supporting organs to speed response and recovery.

SIMILLIMUM -the remedy that most closely matches to a person’s set of unique symptoms.

Hering’s Law of Cure. Three observations made by Constantine Hering, M.D. (18001880), who is considered “the father of American homeopathy”:

AGGRAVATION. Worsening in the patient’s condition after getting a homeopathic remedy. Homeopaths claim this can signify that the remedy was appropriate. Critics note that the concept helps them deny failure when the patient feels worse.

HOMOTOXICOLOGY. A system developed by German homeopath Hans Heinrich Reckeweg, who claimed that symptoms are the result of the body’s attempt to use “homotoxons” to detoxify the body. Reckeweg developed many homeopathic mixtures said to enhance “homotoxon” production. He also claimed that his remedies activate a “greater defence system'” that can neutralize and excrete homotoxins [3].

HOMOTOXINS. Substances (chemical/ biochemical) and nonmaterial influences (physical, psychic) that can cause all forms of ill health in humans [3].

HOMOTOXONS. Compounds resulting from chemical reactions that neutralize the poisonous property of homotoxins [3].

HORMESIS. The concept—based on the (obsolete) Arndt-Schulz law—that concentrations of potentially toxic substances below the amount that cause inhibition (toxicity) will cause stimulation. (It is well known that substances can have different effects at different concentrations, but they do not follow the general pattern proposed by homeopathy advocates.)Isopathy. Preparation based on causal agent.

LAW OF SIMILARS (“Like cures like”). Homeopathy’s fundamental concept, which alleges that: (a) any pharmacologically active agent will create a characteristic set of symptoms when administered to healthy individuals; (b) sick individuals will display a specific set of symptoms that express their illness; and (c) administration of the “similar” medicine to the sick patient will initiate a curative response [4].

MATERIA MEDICA (HOMEOPATHIC). Compilations of the symptoms reported duringhomeopathic provings. Each substance has a separate section that lists the various symptoms.

MOTHER TINCTURE-the original standardized preparation of a substance from which homeopathic potencies are made.

DECIMAL -potency based on the ratio of 1 part substance to 10 parts dilution. Designated with a X (in Europe designated with a D) after the remedy name. X potencies are considered low potencies. X potency is often used for children, sudden illness and first aid treatment. Decimal represents dilutions that are manufactured by mixing 1 part of the starting material with 9 parts of the diluting solution. Each subsequent dilution repeats the process of 1:10 dilution. A 6X dilution, for example, has gone through the process 6 times and contains 1 part of starting material per 1 million parts of final solution. Dilutions of 24X or greater are unlikely to contain a single molecule of original substance.

CENTESIMAL -potency based on the ratio of 1 part substance to 99 parts dilution. Designated with a C after the remedy name. C potencies are considered medium potencies. C potency is often used for seasonal problems and chronic conditions. The designation “C,” which is the Roman numeral for 100, represents dilutions that are manufactured by mixing one part of the starting material with 99 parts of the diluting solution. Each subsequent dilution repeats the process of 1:100 dilution. A 6C dilution, for example, has gone through the process 6 times and contains 1 part of starting material per 1 trillion parts of final solution. Dilutions of 12C or greater are unlikely to contain a single molecule of original substance.

M -potency based on the ratio of 1 part substance to 1000 parts dilution. Designated with a M after the remedy name. M potencies are considered high potencies. Please note letter “M” stands for number 1000 in Latin. Thus M potency would mean the same as 1M (which is actually 1×1000). Now if we put it all together, potency number 1000, 1000C, M or 1M indicate the same thing. Similarly, 30 and 30C would mean the same potency. So is the case with 200 and 200C. For example, a CM potency would mean 100M or hundred thousand.

LM -The millesimal (LM) scale diluting the remedy by 1 part to 49,999 for each potency.

The Diagram below shows how Homeopathic Medicine is made. 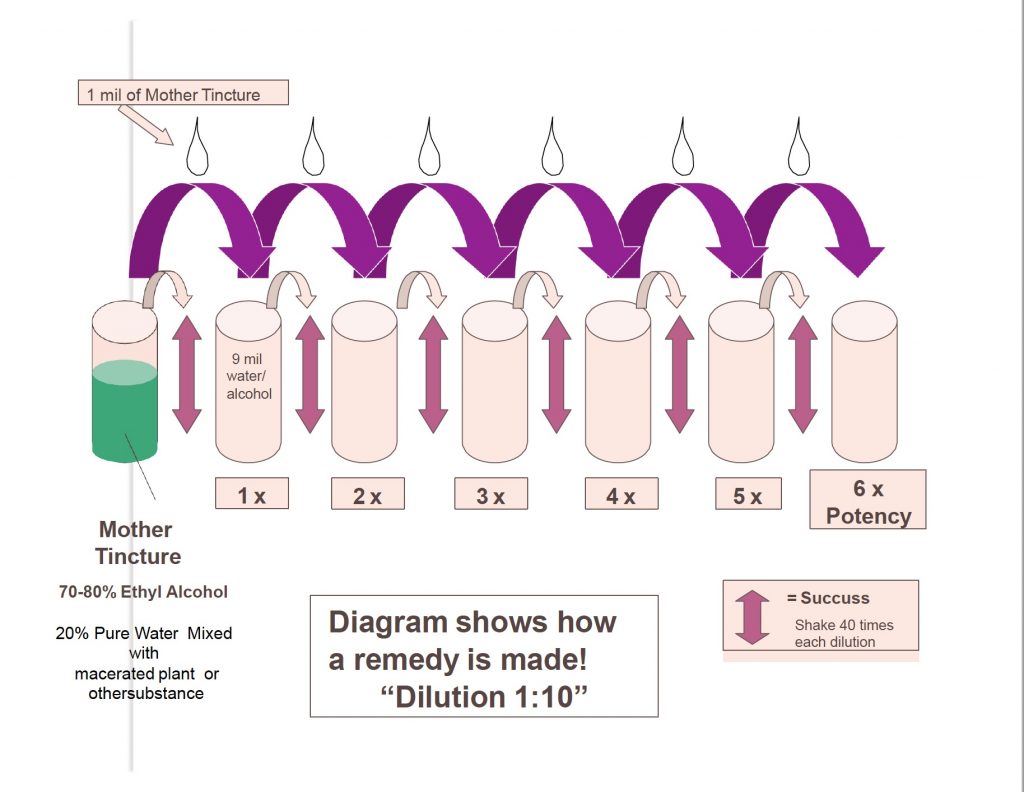 Categories : What is Homeopathy