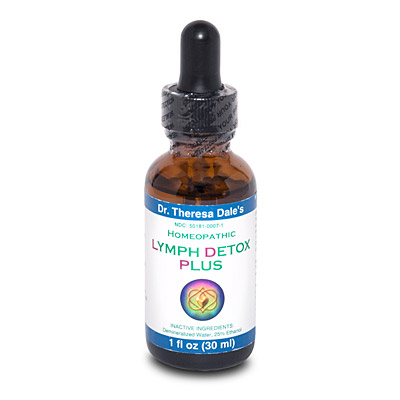 The Lymph System is a vital circulatory system and the body’s primary immune defense and waste eliminator system; it is critical to managing the elimination of toxins from our body. It contains over 600 ‘collection’ sites called ‘lymph nodes’ and has a network of collecting vessels, making it even more extensive than the venous system. Our Lymphatic System is primarily responsible for carrying disease-fighting material to cells attacked by germs, transporting the dead germs away, and supplying protein-rich plasma fluid back to the heart. Add our lymph detox remedy to your health regimen.
Buy Now

This powerful yet gentle lymph detox remedy is essential in “moving” lymph and allowing the body’s energy channels, organs, and glands to detoxify. A stagnant lymph system is present in all states of disease and obesity.

The Lymph System is a vital circulatory system and the body’s primary immune defense and waste eliminator system; it is critical to managing the elimination of toxins from our body. It contains over 600 ‘collection’ sites called ‘lymph nodes’ and has a network of collecting vessels, making it even more extensive than the venous system. Our Lymphatic System is primarily responsible for carrying disease-fighting material to cells attacked by germs, transporting the dead germs away, and supplying protein-rich plasma fluid back to the heart. When this system is blocked, we become defenseless against attacks by viruses, fungi and bacterium.  It is difficult to lose and maintain weight and have a healthy body if your lymph is stagnant.  Please see charts below.

This is an excellent lymph detox remedy for edema of skin and mucous membranes.

It is especially suited to cases when any injury, however remote, seems to have caused the present trouble. After traumatic injuries, overuse of any organ, strains. Arnica is helpful for cerebral congestion. A muscular tonic. Traumatism of grief, remorse or sudden realization of financial loss. Limbs and body ache as if beaten; joints as if sprained. Bed feels too hard. Marked effect on the blood. Affects the venous system inducing stasis. Black and blue spots. Tendency to hemorrhage and low-fever states. Tendency to tissue degeneration, septic conditions, abscesses that do not mature. Sore, lame, bruised feeling. Rheumatism of muscular and tendinous tissue, especially of back and shoulders. Influenza.

Used for Hepatic, and rheumatic affections, particularly with urinary, hemorrhoid and menstrual complaints.

Very useful for old gouty constitutions as well as pain in region of kidney; hence it is used for vesicle troubles, gallstones, and vesicle catarrh. It has also marked action on the liver, promoting the flow of bile. Often arthritic affections with urinary disturbances. Wandering, radiating pains. Used for spinal irritation.  All Berberis pains radiate, are not worse by pressure, but especially standing and active exercise.

Acts especially on mucous membranes, to help eliminate thick, yellowish, ropy, mucous, secretion. The catarrh may be anywhere, throat, stomach, uterus, urethra,- it is always characterized by this peculiar mucous discharge. Hydrastis is especially active in old, easily tired people, cachectic individuals, with great debility. Will also help weak muscular power, poor digestion and obstinate constipation.  Lumbago. Emaciation and prostration. Its action on the liver is marked. Cancer and cancerous state, before ulceration, when pain is principal symptom. Goitre of puberty and pregnancy. Smallpox internally and locally. The power of Hydrastis over smallpox seen in modifying the disease, abolishing its distressing symptoms, shortening its course, lessening its danger and greatly mitigating its consequences (J. J. Garth Wilkinson).

Very helpful for Repeated colds of tuberculosis feeling of weakness, chilliness alternating with heat;  naso-pharyngeal catarrh, burning in throat, pains in limbs and thoracic oppression. Pain in  region of kidneys, with dysuria. Useful for Kidneys sensitive to pressure.

A prominent liver remedy, covering many of the direct reflex symptoms of  diseased conditions of that organ. The jaundiced skin, and especially the constant pain under inferior angle of right scapula, are certain indications. Paralytic drawing and lameness in single parts. Ailments brought on or renewed  by change of weather. Serous effusions. Hydrocele. Bilious  complication during gestation.

The effects on the skin, rheumatic pains, mucous membrane affections, and  a typhoid type of fever, make this remedy frequently indicated. Rhus affects fibrous tissue  markedly-joints, tendons, sheaths-aponeurosis, etc, producing pains and stiffness.  Post-operative complications. Tearing pains. Motion always “limbers up” the Rhus patient, and hence he feels better for a time  from a change of position. Ailments from strains, overlifting, getting wet while perspiring.  Septic conditions. Cellulitis and infections, carbuncles in early stages. Rheumatism in the cold season.

The location of your lymph system and lymph nodes may be seen below. 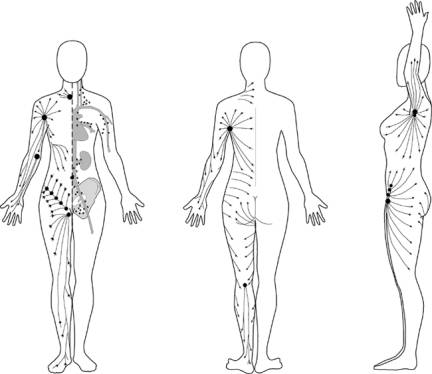 The Wellness Center ‘s products are to be used according to standard homeopathic indications and prepared at a FDA registered facility in strict accordance with the Homeopathic Pharmacopeia of the United States (HPUS), and in compliance with FDA regulations. They have no known side effects.