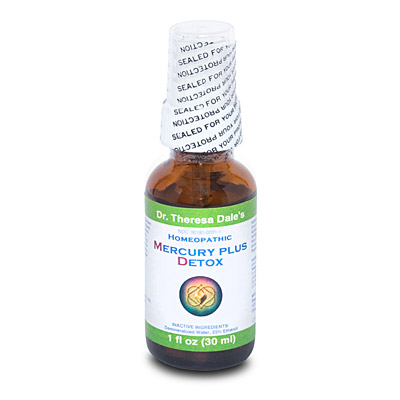 Dr. Theresa Dale’s Mercury Plus Detox is a proprietary homeopathic formula. Over the past 200 years, the homeopathic ingredients in this formula have been researched to assist the body in detoxification of heavy metals, and vaccinations. An FDA-registered homeopathic formula that is proven safe and effective for both adults and children. Directions are on the label.

Members of the Wellness Optimization Club will have access to a mercury detoxification dietary protocol.

This revolutionary formula is composed of 8 proven homeopathic preparations.  This remedy is best taken with its companion product, Lymph Detox Plus, which is a drainage remedy to detoxify all organs.

Dr. Theresa Dale’s Mercury Plus Detox is a proprietary homeopathic formula. Over the past 200 years, the homeopathic ingredients in this formula have been researched to assist the body in detoxification of heavy metals, and vaccinations. An FDA-registered homeopathic formula that is proven safe and effective for both adults and children. Directions are on the label.

While the American Dental Association originally denied that mercury from these fillings leaked vapor, which is absorbed into the bodies of persons having this dental filling material, in recent years, facing numerous studies to the contrary, have had to concede, that ‘silver fillings’, do leak mercury vapor, one of the most toxic substances known to man.

The metallic mercury used by dentists to manufacture dental amalgam is shipped as a hazardous material to the dental office. When amalgams are removed, for whatever reason, they are treated as hazardous waste and are required to be disposed of in accordance with federal OSHA regulations and it is inconceivable that the mouth could be considered a safe storage container for this toxic material.

A multi-million dollar U.S. Government study conducted between 1988 and 1994 could hold the key to producing epidemiological data linking dental fillings to a myriad of illnesses.

This new information comes straight from the National Institute of Health, the NHANES III Study (National Health and Nutritional Examination Survey), a study that according to the mission statement of National Center for Health Sciences “is to provide statistical information that will guide the actions and policies to improve health of the American people. As the Nation’s principal health statistics agency, NCHS leads the way with accurate, relevant, and timely data.”

A recent statistical analysis of this data was done to see if there were any links to dental fillings and adverse health conditions.

Their initial figures revealed that while 78% of the American public have dental fillings, 95% of the people with International Classification of Disease Codes 340-349: “Disorders of the Central Nervous System”, which include MS, Epilepsy, Paralysis and Migraines, have dental fillings.

Mercury has been shown to induce a number of immunological and neurotoxic changes. Researchers at the University of California found that thimerosal:

For more than 60 years, the medical community simply trusted the Eli Lilly and Co.’s assertion that thimerosal/merthiolate had a low potential toxicity if injected into humans. Based on unscientific and unethical studies done in the late 1920s, several generations of public health care officials, doctors and medical educators were duped into injecting the most toxic and lethal chemical known to man into infants

Documents from the archives of Eli Lilly and Co., the original manufacturer of thimerosal, clearly demonstrates that the mercury-based vaccine preservative, implicated in a number of recent lawsuits as causing neurological injury to infants, was known as early as April 1930 to be dangerous.

In its apparent eagerness to promote and market the product, in September 1930, Eli Lilly secretly sponsored a “human toxicity” study on patients already known to be dying of meningococcal meningitis. Andrew Waters of the Dallas-based law firm of Waters & Kraus stated that, “Lilly then cited this study repeatedly for decades as proof that thimerosal was of low toxicity and harmless to humans. They never revealed to the scientific community or the public the highly questionable nature of the original research.”

The tests were conducted in 1929 by a young researcher named K.C. Smithburn who injected 22 human subjects who were already dying with a 1 percent solution and then pronounced that all the patients were reported “without ill effect.”

That they all died was never mentioned. “It’s apparent that Lilly didn’t want to do the study themselves because it’s apparent that there were enormous ethical problems with injecting people — even people dying of meningitis — with mercury,” Waters said. “What Smithburn did was wrong, because he agreed to do the study for Lilly, and not only did he agree to do it, but he agreed to give them results that he knew were flawed.”

There simply are no words that can be used to describe what Eli Lilly and Co., and then other pharmaceutical companies perpetuated through decades of use of a highly toxic compound like thimerosal. And there is no ethical explanation for current and former American administrations that have either tried or succeeded in providing protection to Lilly and other pharmaceutical companies from lawsuits for damages done to children from the use of their products.

According to Dr. Hugh Fundenburg, one of the most quoted biologist of our time (with nearly 850 papers in peer review journals), if an individual receives too many consecutive flu shots his or her chance of developing Alzheimer’s disease is 10 times greater than if they had one, two or no shots. When asked why, Dr. Fundenburg stated it is due to the mercury and aluminum buildup that are in many flu shots and in many other childhood vaccines. The gradual mercury and aluminum buildup in the brain causes eventual cognitive dysfunction.

According to Dr. Haley at the University of Kentucky:

“Mercury dramatically reduced the viability of a major brain protein called tubulin, but had little if any effect on another major protein, actin. Both tubulin and actin are critically important for the growth of dendrites or maintenance of axon structures of neurons. Exposing neurons to mercury rapidly results in the stripping of tubulin from the axon structure, leaving bare neurofibrils that form the tangles that are the diagnostic hallmark of Alzheimer’s disease.

Researchers at the Department of Physiology and Biophysics, Faculty of Medicine, at the University of Calgary also show how mercury causes brain neuron degeneration and provide important direct evidence on how low levels of mercury exposure can initiate neurodegenerative processes in the brain. In a graphic visual presentation they show how mercury ions denuded nurofibrils and how mercury prevents tubulin molecules from linking together.

It was “finally” recognized in 1999 that the long half-life of ethlymercury could theoretically result in accumulation and toxicity during chronic applications and as such joint statements by the American Academy of Pediatricians and the United States Public Health Services recommended the removal of thimerosal from all vaccines.

With this in mind, it is shocking that in 2004 we find the CDC adding a thimerosal-containing vaccine into the childhood immunization schedule and amazing to learn that American officials have not led a movement in the third world to diminish or eliminate thimerosal from the millions born each year there. American officials seem to care not for what happens to children around the world as they “go through the motions” of removing some, but not all of the thimerosal from American clinics.

American health officials have not faced the truth, will not admit their error, and even five years after the above 1999 recommendations, we still have the CDC, the IOM and several important health officials denying that there is any problem with using mercury in vaccines.

In fact, with the three now scheduled flu vaccines to be administered before two years of age, some children will be receiving between 37-75 mg of thimerosal, depending on how the shots are administered (doctors are allowed some flexibility to give half doses to kids under two years of age).

Despite their own statements in 1999, the medical authorities are actually reintroducing thimerosal into the childhood immunization schedule, even as they brag about taking it out.

It is very important to note that though the U.S. authorities are diminishing the mercury content of vaccines at home it does not change the picture of the “global” thimerosal nightmare where most children are still receiving high pre-2001 level doses. Dr. Boyd Haley, a world-renowned expert on the toxicity of mercury said, “I am ashamed that our country is misleading other parts of the world with regards to the thimerosal issue.”

The Wellness Center ‘s products are to be used according to standard homeopathic indications and prepared at a FDA registered facility in strict accordance with the Homeopathic Pharmacopeia of the United States (HPUS), and in compliance with FDA regulations. They have no known side effects.